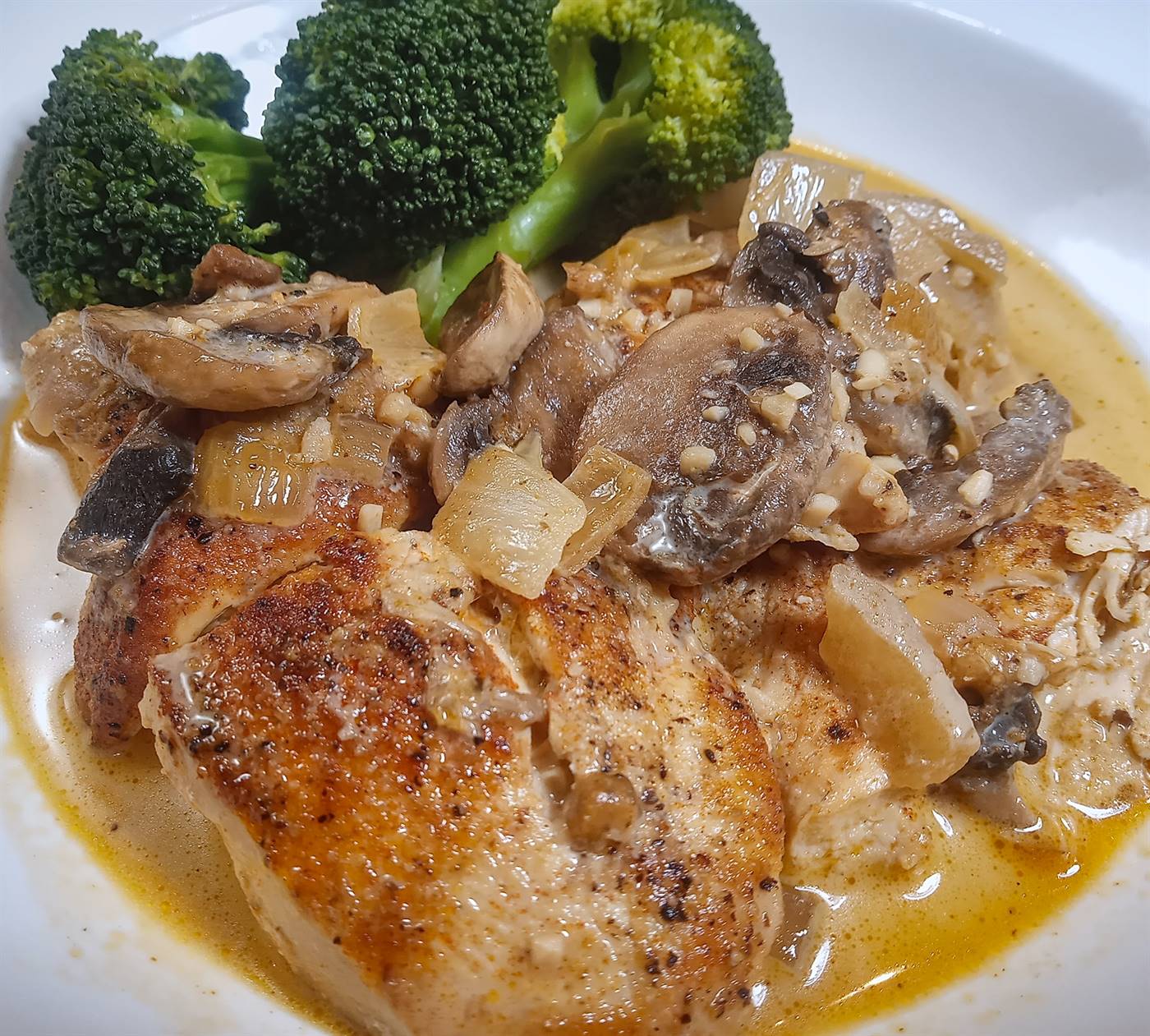 Low Sodium Mushroom Garlic Chicken in the most delicious saucy mushroom garlic sauce and is even tastier than it looks!  I kept getting bigger spoons to do my taste tests. Don’t even bother looking at the standard high sodium canned cream of mushroom soup to make this. And don’t worry, it is a super supper, easy to do!

I eat lots of chicken now after my stroke and I hate having a bland, plain hunk of chicken. This is an excellent saucy mushroom garlic sauce choice for lean chicken breast meat, adding richness and savory succulence!

Besides the spiced golden brown chicken, the sauce is the real throw down for your taste buds. Add more garlic or mushrooms if you like, or double up on the sauce and pour over veggies, pasta, or rice by itself.

I could barely refrain from taking spoonfuls of this sauce to taste test, it was so good on my tongue. It was really tempting to ladle some in a mug and just sip on it. Next time, I am going to double up on the sauce and probably develop a soup recipe in the future.

Sodium in this recipe

Sodium levels in most recipes appear to be between 500 – 900mg of sodium per serving. My low sodium saucy mushroom garlic chicken comes in safely under my target goal of 250mg with it having just 191mg per serving.

This recipe makes 6 servings each which includes a half chicken breast that would be a little over 4oz for a regular meal. Also, a generous slathering of sauce and mushrooms with the chicken and sides. See the next section to further reduce sodium.

Parmesan cheese adds the most sodium to this dish.

While this recipe is below my personal sodium threshold per meal, the parmesan cheese accounts for a little over half the sodium per serving.

If you want to further reduce the sodium you can cut the parmesan in half to cut out approximately 50mg of sodium. To help keep a cheesy taste in this dish, you can always add nutritional yeast to your dish to taste. It has a similar parmesan taste, umami flavor, and effect.

You will have to add and stir in a tablespoon at a time to your taste. I have not used it in this recipe so I don’t have an amount to start from. Nutritional yeast has 0mg of sodium per tablespoon while the Parmesan has 80mg per 2 teaspoons.

The Mushrooms make it

I have never been a huge whole or sliced mushroom fan. However, I do like the mushroom taste as in mushroom soup but, in this sauce, they are so good!  (Not a fan of the texture of large mushroom pieces, just taste.) But, the mushrooms add an awesome flavor to this dish that easily makes me get over my dislike.

I used the pre-sliced Baby Bella mushrooms and it couldn’t be easier. But a portabella mushroom would be good too. I plan on trying that next time.

The flavors of this saucy mushroom garlic sauce are simply mouthwatering.

If you would like more sauce, then go ahead and double up the sauce portion and you’ll be especially pleased. I kept taste testing it while I was doing the final cook and I just couldn’t stop. Plus, with more sauce, you can pour it over your side dish or sop it up with a piece of bread.

Even if the chicken is eaten up, you can continue to use the sauce up on other side dishes or even a hamburger, Yum! I am going to look into making this into a soup or basic side sauce out of this soon, hopefully.

If you want a slightly thicker sauce, you can dust in and stir some cornstarch before adding in the chicken. Slowly add a teaspoon at a time to thicken.

How to cook your chicken breasts

First cut the chicken breast in half as if you were butterflying them (same concept). Use the flat side of a meat mallet to pound the chicken to an even flatness for even cooking. It also provides more surface area to turn into a flavorful golden brown outside coating!

I cover (top) the chicken with a plastic grocery bag when smacking with the mallet.

Sear breasts in batches of three or four. I am able to fit four of the six pieces at a time in my large 12” cast iron skillet. I will probably do three and three at a time next time.

Depending on the size of your pan you need to avoid over-crowding in the pan. Otherwise, they won’t brown nearly as nice and you end up with steamed, rubbery bland chicken.

Instead, each breast half needs plenty of space between them which will sear your chicken to a beautiful golden brown outside color. Doing so will help lock in moisture and result in an evenly cooked, juicy, flavor-packed chicken bite you want!

Once the chicken is in the pan, don’t move the chicken for a full five minutes, don’t peek, poke or try to flip the chicken. If the chicken doesn’t easily flip with tongs, it’s not ready for flipping yet — and it won’t be golden-brown.

Flip the chicken breast half one time only and don’t touch again, looking the goal of a crusty golden-brown color on each side.

Be sure to use a meat thermometer so as not to overcook your chicken. Remove chicken from pan at (160°F) for juicy chicken when finished with the dish. It will continue cooking a bit when removed and also added back into the sauce.

After removing the chicken and it has cooled enough to handle, I cut each breast half into thirds. I do this while the sauce is cooking up.

This saucy mushroom garlic chicken recipe is easy and can be paired with lots of possibilities when it comes to choosing a side dish.

Some of the best options for this chicken recipe are almost any steamed or roasted veggies such as….

Reheat covered in the microwave with a tablespoon of water to the sauce to add a little moisture. Sauce may tend to separate after being cooled so give it a quick stir after reheating.

Recommended Equipment & Ingredients For This Recipe.
This section contains affiliate links to products I use and recommend.

Please let me know how this Low Sodium Saucy Mushroom Garlic Chicken turns out for you in the comments and a rating! I’m always eager for your feedback and hope my recipes turn out amazing for you. You can follow me on Facebook and Pinterest also, to hear about new recipes. Serving: 6.Calories: 250kcalCarbohydrates: 4.1gProtein: 29.1gFat: 12.6gSaturated Fat: 4.5gCholesterol: 91mgSodium: 191mgPotassium: 509mgFiber: 0.6gSugar: 1.1gCalcium: 140mgIron: 1mg
https://tastyhealthyheartrecipes.com/main-dishes/entrees/low-sodium-saucy-mushroom-garlic-chicken/
Did you make this recipe?Leave a rating and let me know how it was! 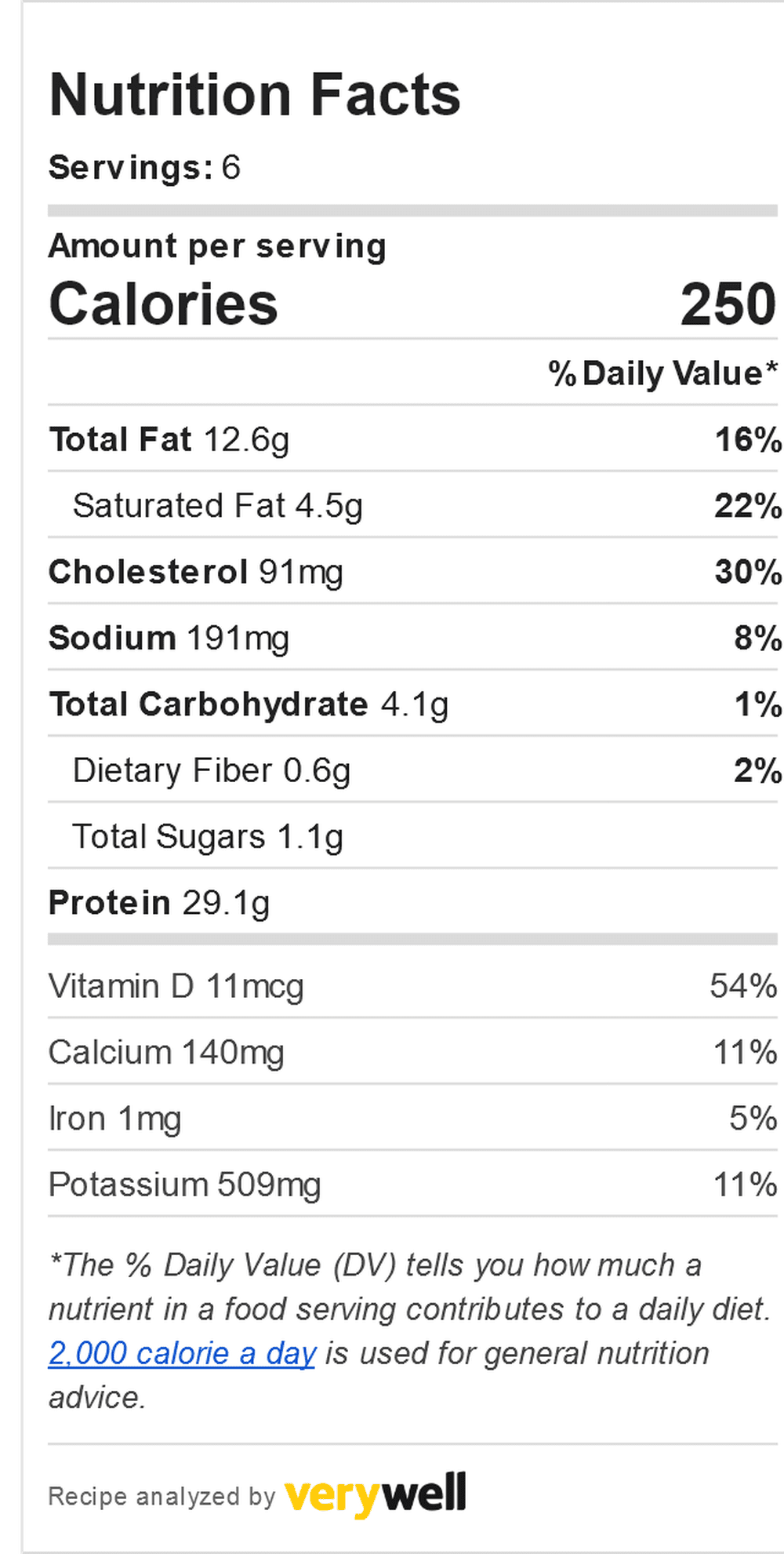